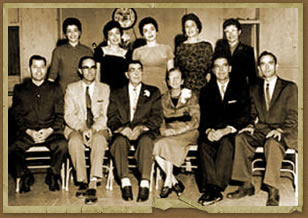 It is little short of amazing that a singing group like the Chuck Wagon Gang could be around for over sixty years without changing its sound, but that is what this great group of country gospel singers has done. At one point, the Chuck Wagon Gang was the second highest selling artist for Columbia Records. During their recording years, they sold over 40 million records.

By the late 1970s, the group was still touring but felt a lack of support from the label they had recorded for during the previous forty-one years. Columbia had stopped servicing their songs to radio; thus airplay had become non-existent. Roy and Ruth Ellen Carter talked about it. They asked each other the question: "What can we do to rebuild what Daddy started?"

It was at this point starting in 1979 that they began recording for Copperfield Records for several years. After pulling all product from the marketplace in 1999, Copperfield re-launched its Imprint label in 2004. Biddy says, "After spending time with two other distributors, we created a new CWG compilation CD 'Country Gospel Treasures' and started re-releasing the 19-album catalog of the Chuck Wagon Gang product to the Mainstream and Christian marketplace through Central South Distribution in Nashville, TN."  All of the Chuck Wagon Gang music is available through iTunes and other digital outlets along with ring tones on several of the most popular tracks.

The Chuck Wagon Gang are best remembered as a close harmony country gospel quartet. The original lineup was D. P. 'Dad' Carter, baritone (b 28 Sep. 1889, near Columbia KY; d 28 April 1963); Ernest 'Jim' Carter, bass (b 10 August 10, Sherman TX; d February 1971); Rose Carter, soprano (b 31 Dec., Altus OK); Anna Carter, alto (b 15 Feb., Shannon TX). Dad and Carrie Carter met in a singing school and had nine children; the group was formed in Bledsoe, TX to help make ends meet, debuted 1935 on KFYO Lubbock as the Carter Quartet (no relation to the famous Carter Family of Virginia). Within a year they had switched to WBAP in Fort Worth, one of the most powerful in the state, taking the name of a western band that had left the station. They were heard five days a week for 15 years, with minor disruptions during WWII; Art Satherley began recording them in 1936 on American Record Company labels, then Columbia after ARC was taken over by CBS 1938.

Their earliest broadcasts and first two recording sessions included secular songs, but the gospel singing was so popular that it took over exclusively. They recorded 408 selections in 40 years; when their sponsor offered photos of the group in exchange for coupons from flour sacks, 100,000 were requested; in 1955 they received a gold disc for 'I'll Shout And Shine' and were named the top US gospel group by the National Disc Jockey Association. Dad played mandolin on early secular recordings; otherwise Jim's acoustic guitar was the only accompaniment until '54, when Jim was replaced by younger brother Roy Carter (b 1 March 1926, Calumet OK) and a discreet electric guitar was played by Anna's husband, Howard Gordon (b 30 May 1916, Denton TX; d 3 October 1967). Dad retired 1956, replaced by yet another son, Eddie, who was not full-time after 1957, replaced by the first non-family member, Pat McKeehan. Dad's last records were also the last made in Texas; all the rest were made in Nashville.

They began playing concerts outside Texas late 1940s, encouraged by Rev. J. Bazzal Mull, a blind Baptist minister and broadcaster who sold carloads of their records through the post; in later years Nashville session players such as Grady Martin and Harold Bradley were used on records. Other singers included Haskell Mitchell, Jim Waits, Howard Welborn, Jim Wesson, Ronnie Crittendon. They appeared on TV in the 1960s, sang over the years on the Grand Ole Opry and the Louisiana Hayride; in 1966 at Carnegie Hall, Florida's Gator Bowl and the Hollywood Bowl; they appeared in film Sing A Song For Heaven's Sake 1967. Rose retired 1966; Anna led a group 1968 with her daughter Vickie, son Craig, Jim Black singing bass, but married Jimmie Davis late that year and subsequently sang in his trio. The group still occasionally appeared mid-1980s with Roy and the youngest Carter sisters Ruth Ellen and Betty, Ron Page singing bass. Their style never changed: pure Southern rural 'shape- note' singing (see Gospel music), with beautiful harmony found in the songs themselves; they were unusual in the genre in using female lead voices, and voices of rare liquid beauty at that.

A compilation in Columbia's Historical Series, available from the Country Music Foundation, includes tracks from '36--60: two secular songs from '36--7, 'He Set Me Free' '41 (written by Albert E. Brumley and said to have been the model for 'I Saw The Light', by Hank Williams), 'When I Thank Him For What He Has Done' '60 (also by Brumley), and favorites such as 'We Are Climbing', 'After The Sunrise', etc. and 'The Church In The Wildwood' '36, more beautiful (and better recorded) than the other Carter Family's version of four years earlier. "Later recordings on the Copperfield label were the best ever", stated Roy Carter and sister, Ruth Ellen.